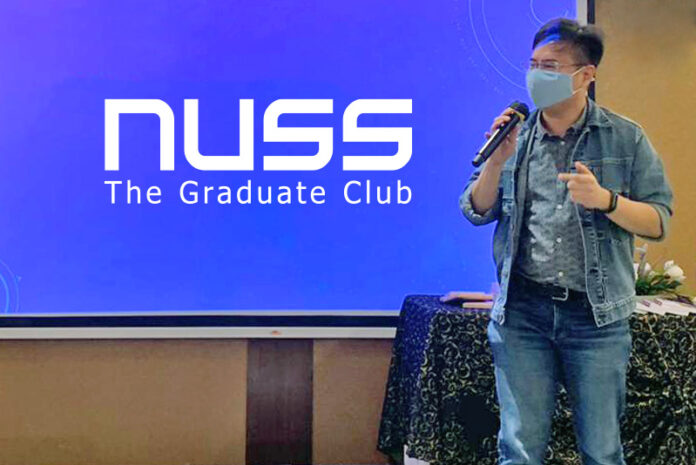 The NUSS Toastmasters Club (TMC) will be organising the International Women’s Day All-Ladies’ Night on 11 March 2021. Since it was chartered in 2014, TMC has built a solid reputation for exemplary work in public speaking and leadership. We speak to 2020/2021 Club President Cheryl Chia (DL2) for an inside look.

Cheryl Chia’s term as the 2020/2021 Club President started off very differently compared to her predecessors – it was in the midst of the COVID-19 Circuit Breaker period and her first chapter meeting as President was held via Zoom.

As club president, it falls on her to set the tone for the club, provide supportive leadership for all of the club’s activities and take responsibility for the progress and welfare of the club. Prior to her appointment in July last year, she served as the club’s Vice President – Education (VPE). Cheryl highlights, “It was a natural progression for me from my VPE role, and the previous executive committee (Exco) was also very encouraging. I see this as part of leadership training and service to the club which I have grown attached to.”

Under Cheryl’s leadership, the NUSS TMC became the first TMC in Singapore to host a hybrid meeting (comprising physical and virtual attendance) in October 2020 after Phase 2 was introduced. There are over 200 TMCs in Singapore and the NUSS TMC falls under District 80, Division Z, Area 5 alongside four other clubs. She cited this hybrid meeting as being one of the most memorable ones she has had since taking up the mantle. “It took place after nine months of not seeing each other face-to-face. All our members were so excited to be back. It was also memorable because we were graced by our Area Z5 Director, Division Z Director, and Program Quality Director.”

The club, which is currently 56 member-strong, has been organising regular hybrid events since then. We caught up with Cheryl to find out more about the NUSS TMC.

What kind of events does TMC have for members?

We have monthly Chapter Meetings, our year-end-cum-anniversary dinner, and Table Topics workshops. We also organise special workshops and events like the recent ‘How to Win Business Deals and Build Relationships through the Virtual Space’ and our upcoming International Women’s Day All-Ladies’ Night.

How does TMC help members improve their communication and leadership skills?

For communication skills, we use Pathways, Toastmasters International’s structured education programme. It’s an interactive online learning experience to develop your communication skills through its 11 Pathways options. The 11 courses in Pathways include Dynamic Leadership (DL), Effective Coaching (EC), Motivational Strategies (MS), and Innovative Planning (IP), and each course has five levels of competency.
For leadership skills, we encourage members to take up appointment roles during our monthly meetings and special committee positions, and to serve as Exco members for Club, Area and Division levels.

The NUSS TMC has been awarded President Distinguished Club status by Toastmasters International seven times since 2008/2009. What does receiving this award mean?

It is the highest club award presented to clubs which show enhanced quality and member experience. We take each member’s learning progress and leadership development very seriously. We maintain this status by providing a supportive and encouraging environment for members to complete their Pathway levels. The club also facilitates active member engagement and has a robust mentor and mentee structure to share best practices among members.

What other notable achievements does the NUSS TMC have?

For 2019/2020, we were amongst the District 80 TMCs who were able to sustain our membership numbers. Two of our veteran speakers received the Triple Crown Award, a Toastmasters recognition awarded to members who achieve three education awards in a single programme year — Robert Chen who achieved Distinguished Toastmaster (DTM) recognition and Lim Chee Hoo who achieved the Advanced Communicator Gold (ACG) in the Communication Track and Advanced Leader Bronze (ALB) in the Leadership Track. Chee Hoo also received a Dedicated Service Award 2019/2020 by District 80.

What are your top tips for anyone who has public speaking anxiety?

You can get better at public speaking through training and there is no need to have fear. In Toastmasters, FEAR is just False Evidence Appearing Real, and we can overcome this fear of public speaking by learning and taking baby steps.

A good prepared speech starts with a good script, so it’s important to learn the techniques of drafting a script that has an introduction, body and conclusion. Have a mentor to review your script and work on delivering it. Record yourself on video, practice in front of a mirror, and don’t forget the three Ps – practise, practise, and practise!

Any success stories from TMC members?

Our members say they are more cautious of pause fillers like ‘ah’, ‘erm’, or ‘okay’ after using the ‘Ah Counters’ during speech practice. They have learnt to refrain from using these words and are now able to do speeches without them. A member also shared that regular TMC chapter meetings has helped with his stammer and he can now deliver a speech without stammering.

More recently, we have Toastmaster Sharon Kim (IP3) who was the second runner up in our club’s International Speech and Table Topics (ISTT) contest. She never thought she would be making a humorous speech but she is now moving on to represent our club for the Humorous Speech Contest – Area. She used to think making speeches were nerve-wrecking but with the help of TMC, she is beginning to realise her potential and even representing our club!

What’s your vision for the club this year and beyond?

To maintain the good standing of the club, ensure quality chapter meetings are run, and to continue organising learning workshops. I also hope to see growth in our club both in numbers and member performance.

Misconception 1: Everyone will see that I’m nervous

According to Cheryl, no one will be able to tell that you are. Scientific evidence has proven that audience members don’t pick up readily on speakers’ anxieties. “No matter what you may think, even the intense inner feelings you may experience are too subtle to be detected by others,” she assures.

Misconception 2: I’ll be judged by what I say and how I look

“Most audience members will be more preoccupied by their own thoughts and appearance than yours,” says Cheryl. Researchers refer to this as the ‘spotlight effect’. There is considerable evidence proving that presenters overestimate the extent to which others are judging them, or even paying close attention to their words, message, or appearance.

Misconception 3: By memorising my script, I will be a good public speaker

“You need to focus on speaking spontaneously with a little structure instead,” explains Cheryl. This means having a rough outline in your head of what you’re going to talk about, but not a word-for-word script. The best speakers can talk spontaneously while staying within a coherent structure they’ve planned in advance.

On 1 September 2022, the atmosphere at Tanah Merah Country Club was thick with excitement amongst golf enthusiasts gathered for the NUSS’ Charity Golf...
Read more
Scene & Heard

Our first-ever National Day Swim Party to celebrate Singapore’s 57th birthday was a blast for the 150 members and guests who frolicked in and...
Read more
- Advertisment -