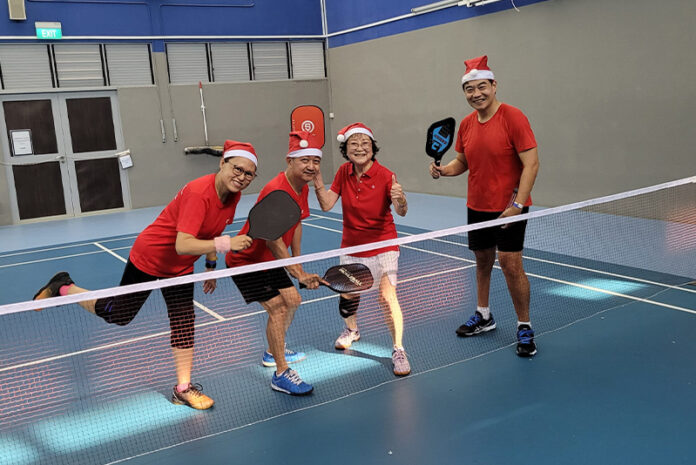 What is a game that combines elements of tennis, table tennis and badminton? Pickleball!

At NUSS, the NUSS Pickleball Section was formed on 6 April 2021 as an interest group. It has grown to a group of 47 members who play twice weekly at Kent Ridge Guild House Sports Complex every Tuesday and Friday, 9 am to 1pm.

The game is easy to learn and is less strenuous on the joints as compared to other conventional racquet games such as tennis. As the rules are simple, the game is easy for beginners to catch on.
Play takes place indoors or outdoors as a doubles game or singles game, on a badminton court with a slightly bigger seven-foot non-volley zone on each side of the net to prevent spiking.
The perforated plastic hollow ball is lighter than a tennis ball while the paddle is like an oversized table tennis paddle. There is also less running back and forth as compared with tennis.
To score, it is played in quick-paced rallies up at the net, whereby a dropped ‘dink shot’ can win a point.

Highlights NUSS Pickleball Convenor Benny Gan, “Pickleball is an exciting, fast-paced and addictively fun racket sport. Many players are badminton and tennis players, which explains why they pick up the game easily.”

Even though players cover less ground on a smaller court, the game gives players a full workout. Many of the older members also find the game more manageable and less stressful.
Unlike other racquet games that require a certain fitness level, pickleball is suitable for all age groups and physical fitness levels. Still, the game can develop into a quick, fast-paced, competitive game for experienced players, according to Benny.

Members who are keen to try the sport are welcome to join the Section – there are no prerequisites.
“The game is great for all ages and skill levels and only takes a short amount of time to learn. Most importantly, it gets people moving and exercising. We welcome NUSS members to come and try out the game before joining the section,”

To join the Section, please contact Benny at bennygtb@gmail.com.

From Frail To Fit On Two Wheels

Our hearty congratulations to our Personal Trainer, Khen Kee Wei for passing his American College of Sports Medicine (ACSM) examinations and being conferred as...
Read more
- Advertisment -