Is Singapore Ready to “Regard Less of Race”? 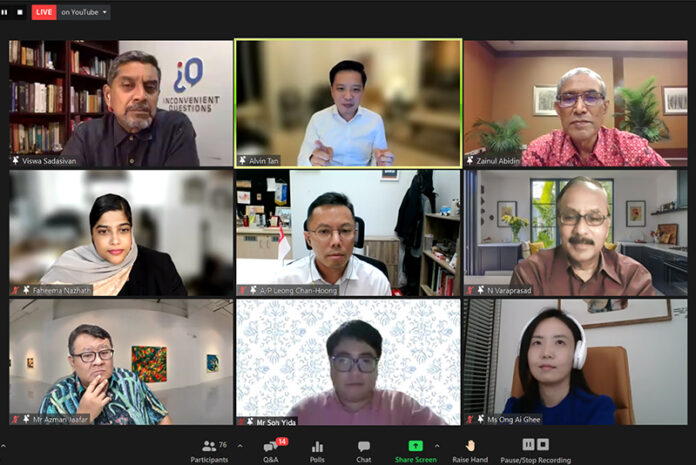 The Inconvenient Questions (IQ) forum, “Regard Less of Race”, organised in partnership with Strategic Moves, was held on 29 July 2021. Close to 500 NUSS members and guests tuned in to watch the forum streamed live over YouTube.

The event examined the status quo of racial issues in Singapore and how our society can “regard less of race” by preserving racial harmony amidst new challenges.

Moderating this sensitive but important discussion on race was Chief Editor of IQ, Mr Viswa Sadasivan. Mr Viswa is also the CEO of Strategic Moves, a corporate strategy consulting and training practice, and a former Nominated Member of Parliament. Joining Mr Viswa in the discussion was a distinguished panel of speakers with a good mix of leaders from both the government and grassroots sectors.

Here are some of the key ideas of the discussion

Relevance of History in Shaping our Discourse

Mr Zainul opined that one should never take the peace and prosperity Singapore enjoys today for granted. At 73 years of age, Mr Zainul said he has witnessed Singapore’s turbulent beginnings, rife with racial conflicts and geo-political threats. He even recounted a story of how he nearly lost his life on his way to Friday prayers back in 1964 when he was unwittingly caught up in the racial riots.

As Singapore looks to chart its trajectory for the future, Mr Zainul argued that it is paramount to keep the lessons of history close to heart. He mentioned that he hopes more is done to educate millennials about Singapore’s past and the core multi-racial policies that make Singapore what it is today.

Mr Alvin reflected on his interactions with foreign youth leaders who conversed with him about their nation’s existential struggles with race.

For instance, in South Africa, he learned that the nation is still reeling from the effects of Apartheid. Even though it officially ended in 1994, it has left Whites and Blacks alienated from each other and in turn caused insular identities to develop. In France, ethnic Algerian minorities have pushed back against being co-opted into the wider national identity of French Republicanism over anxieties regarding losing their racial and cultural identities.

While there is always room for improvement, Mr Alvin expressed that Singapore is fortunate to avoid racial conflicts that have plagued many other countries. For a young nation, Singapore has achieved stellar progress in cultivating racial harmony. To stay on the right track, Mr Alvin argued that Singapore should continue with its unique approach to multiculturalism, which strikes a delicate balance between fostering a shared national identity and retaining and celebrating our rich and vibrant ethnic diversity.

While Singapore should acknowledge the boon of policies that have served the nation well thus far, Prof Leong encouraged Singaporeans to be more open to evolving and fine-tuning them over time as no policy is perfect.

Prof Leong revealed that research studies indicate that ethnic clusters still form in certain estates despite the Ethnic Integration Policy (EIP) quotas, which were put in place to encourage racial assimilation and integration. He also added that EIP quotas could in fact hurt minorities in the long run if nothing is done to remedy the stifling limitations on minorities in selling their apartments.

For policies to remain relevant, Prof Leong advised to look beyond well-meaning intentions of policies and critically consider their consequences on vulnerable stakeholders. These consequences may sometimes manifest in ways that are least expected, such as minorities struggling to sell their apartments due to EIP quotas.

The Critical Role of Discourse for Younger Generations

Speaking from her organisation’s experience in promoting inter-ethnic dialogues, Ms Faheema observed that youths are becoming more vocal about racial issues. She considered the trend not as an indication that racism is worsening in Singapore, but a positive sign that Singapore’s standards for a racially progressive society have risen for the better.

While there is a case for much optimism, Ms Faheema felt that Singapore still has more room to grow in fostering an effective social climate with zero tolerance of racism because people are still hesitant to speak up.

For Ms Faheema, the way forward is to keep conversations going and lend a voice to the wide range of struggles that minorities encounter, from micro-aggressions to the socio-economic disadvantages inflicted by certain policies.

The four NUSS members were lively and energetic, eager to fire away their burning questions, share some of their own anecdotes and contribute their dose of insights to the discussion.

To catch the segment with NUSS members on the panel, check out the full video recording of the forum here

Looking forward to more of such exciting discussions? Keep your eyes peeled for the next IQ Forum jointly organised with NUSS.

Our hearty congratulations to our Personal Trainer, Khen Kee Wei for passing his American College of Sports Medicine (ACSM) examinations and being conferred as...
Read more
Club News

NUSS Toastmasters physical meetings are back and are better than ever! Contributed by Vice-President, Public Relations (2021/22) of NUSS Toastmasters Club, Ms Lim Swee Kim “We...
Read more
- Advertisment -